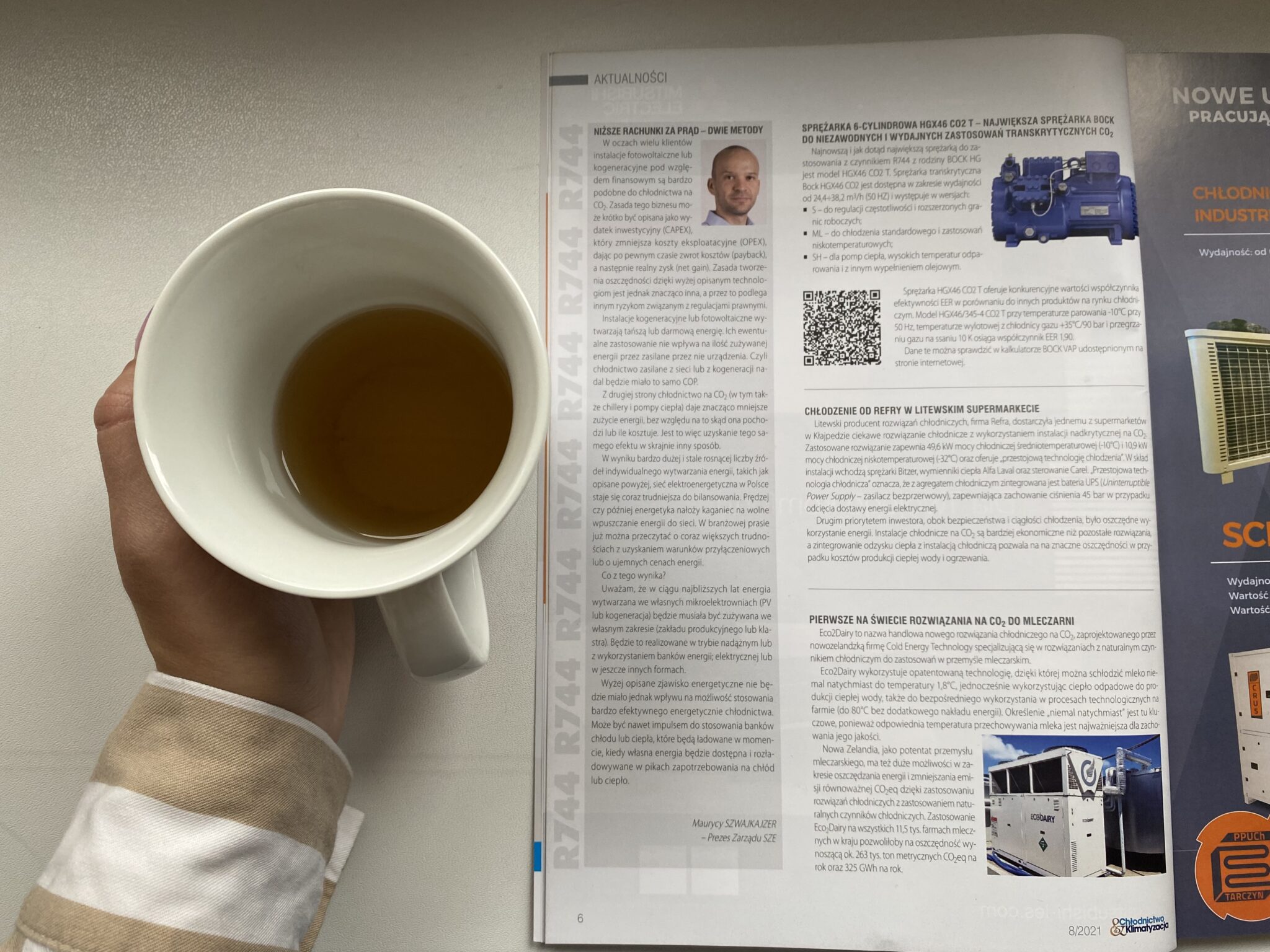 In the eyes of many customers, photovoltaic or cogeneration installations are financially very similar to CO2 refrigeration. The principle of this business can be described as a capital expenditure (CAPEX), which reduces operating costs (OPEX), giving a payback after some time, and then a real profit (net gain). The principle of creating savings thanks to the technologies described above is, however, significantly different, and therefore subject to other associated risks
with legal regulations.

Cogeneration or photovoltaic installations produce cheaper or free energy. Their possible use does not affect the amount of energy consumed by the devices powered by them. So refrigeration powered from the grid or cogeneration will still have the same COP.

On the other hand, CO2 refrigeration (including chillers and heat pumps) use significantly less energy, no matter where it comes from or how much it costs. So it’s getting the same effect in a completely different way.

As a result of a very large and constantly growing number of individual energy generation sources, such as those described above, the power grid in Poland is becoming more and more difficult to balance. Sooner or later, the power industry will put a muzzle on the free flow of energy into the grid. In the industry press, you can already read about increasing difficulties in obtaining connection conditions or about negative energy prices.

What is the conclusion?

I believe that in the coming years, the energy generated in own micro power plants (PV or cogeneration) will have to be consumed on its own (production plant or cluster). This will be done in a follow-up mode or with the use of electricity banks or in yet other forms.

However, the energy phenomenon described above will not affect the possibility of using highly energy-efficient refrigeration. It may even be an impulse to use cold or heat banks, which will be charged when own energy is available and unloaded at peaks of cooling or heat demand.

Anyone who implements investments, problems with buying materials are certainly a huge difficulty.

Disturbed supply chains – could this be the most important topic in refrigeration in 2021?

conference of the Refrigeration & Air Conditioning magazine.
Which will take place on October 28 at the O3 hotel in Warsaw.

Video below. A bit long but very thoroughly explaining the mechanism of the current situation.

When my interlocutor does not fully understand what I do, I do the following exercise with him: in our immediate environment, I point out as many objects as possible that require cooling in order to be created. I list in order: phone case, apple, monitor case, desk veneer, coffee milk, soles of shoes, pen, cover for commercial materials, mouse – chill, chill, chill.

The essence of the polymer industry is heating the semi-finished product to the flow temperature, forming and then controlled cooling of the finished…

Full text of the article for PLASTECHO below.